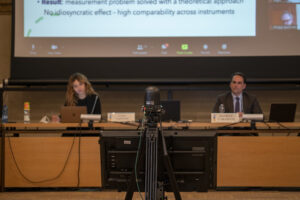 As of 24 February, 2022 the war in Ukraine has had profound and immediate effects on Europe. In the span of one week, fundamental aspects and assumptions of the European contract have been redefined. European integration processes have accelerated in a dramatic way in a number of core state and policy areas. These include the military and security dimension, finance and trade through an increase of the level of debt and sanctions, energy dependence and transition to renewable sources, migration, prospect of enlargement and new accession processes, as well as the strengthening of mainstream parties, European identity feelings and support for EU policy coordination. Original survey data on the assessment of the EU’s role and one’s own country’s role in the Ukraine crisis will be presented. Moreover, the impact of the war has led also the position of individual member-states to fundamentally change, for example on defence, but also the position of neighbouring countries such as Moldova, Georgia, the UK and Switzerland.

The seminar series provides the forum for an academic assessment of these transformations, that have already taken place, and of their possible future directions.

Format. The seminar series brings together EGPP with other programmes of the Robert Schuman Centre. Each session is introduced by experts in the field that map the reflection on the transformational effects of the war in Ukraine on a specific dimension of European integration. This is followed by a debate.

The seminar series is organised by Daniele Caramani.

How to participate. If you want to receive an invitation for all sessions of the seminar series, please send an email to egpp@eui.eu; otherwise, you can click on the links below and register to each event individually.