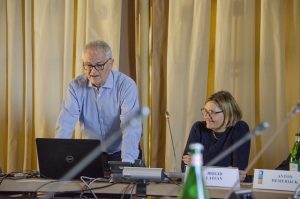 On the 14th and 15th March 2019, many of the participants to the 1998-1999 European Forum, organized by Maurizio Ferrera and Martin Rhodes at the EUI Schuman Centre, reconvened for a two-day open workshop ‘Recasting the Welfare State 20 years later’. The reunion aspired, once again, to make way for a rich exchange of ideas and opinions, on the past, present, and future state of comparative welfare research, this in particular with respect to the perennial political truth that reform is difficult. The discussion was structured in three broad themes, two of which were more academic and a third of greater political importance:

The welfare state is perhaps the most successful feat of mid-twentieth-century social engineering. Since the Second World War, West-European welfare states virtually eradicated old-age poverty, provided universal access to health care and education, and established social security in the cases of unemployment and sickness as a matter of social citizenship right. Over the long run, European welfare states have been hard pressed to reform by deep economic crises, but also by more slow-burning developments of demographic ageing, deindustrialisation, the rise of the service sector, technological change, the feminisation of the labour market, economic internationalization, European Union market integration, and intensified migration.

Unsurprisingly, explaining the staying power of the welfare state became a favorite pastime in comparative research, spearheaded by the seminal work of Paul Pierson on ‘irresistible forces’ being deflected by ‘immovable objects’ in an age of ‘permanent austerity’. In the new millennium, the academic focus in comparative welfare state research decidedly shifted from change-resistant welfare states to an improved understanding of how welfare state in effect do change.