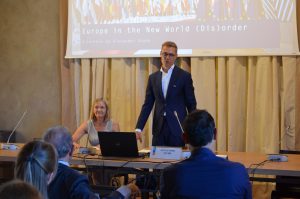 On 5 September 2019, in his lecture, Alexander Stubb gave his vision about the current challenges for Europe. Alexander Stubb is Vice-President of the European Investment Bank since August 2017. He served as Prime Minister, Finance Minister, Foreign Minister, Trade and Europe Minister of Finland. His background is in academia and civil service, with a focus on EU affairs. He was a member of the European Parliament from 2004-2008, a government minister from 2008-16, a member of parliament from 2011-2017 and chairman of the National Coalition Party from 2014-16. He is also the non-executive Chairman of the Board of Crisis Management Initiative (CMI), founded by Nobel Peace laureate, President Martti Ahtisaari. Mr Stubb holds a PhD from the London School of Economics, has published 18 books and is a self-professed sports fanatic.Organiser: Brigid Laffan (EUI – Director of the Robert Schuman Centre for Advanced Studies)