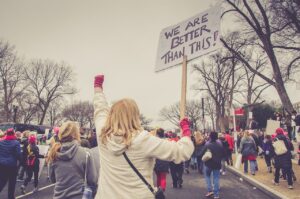 TRANSNATIONAL seeks to explain the intensity of polarisation on immigration, Europe, and climate change. It will combine insights from political cleavage theory with those on identity theory and social networks to examine transnational polarisation through surveys, natural experiments, and interviews. The research is funded by a five-year advanced ERC grant to Liesbet Hooghe which starts in January 2021. The project leaders are Liesbet Hooghe and Gary Marks.

Perhaps the most pressing challenge facing Western democracies is to come to grips with a profound shift in the structure of political conflict. Alongside the left-right divide over the role of the state in the economy, new issues related to the nation, self-rule, and multi-culturalism have come strongly onto the agenda. One side embraces open societies, cultural diversity, and international governance; the other considers these as a threat to their national community and their way of life. We describe this as a transnational divide and believe that it signifies a critical juncture in the political development of Europe no less decisive than the previous junctures that Lipset and Rokkan detect in their classic 1967 article.

The science of politics has progressed as researchers have sought to explain this phenomenon. We have a sophisticated understanding of how voters position themselves on these new issues, and we now know much more about how political parties strategise in electoral competition. A growing literature has shed light on the spatial dimension of the transnational divide, and in particular, on the rural backlash against globalisation.

These advances raise fundamental questions. How can one explain the affective polarisation that has erupted among political activists and in the wider public? Is the conflict motivated by the development of group identities? What is the role of digital and face-to-face networks in consolidating solidarity on either side of the divide? Are we witnessing a new political cleavage in the history of Western society? These are the questions I seek to answer in my proposed research.

The challenge is both theoretical and methodological. We need to theorise the dynamic interplay between individual characteristics and social networks. Beyond the effect of individual demographics in predisposing political attitudes, little is known about how social interaction shapes affective polarisation. This is problematic both for our understanding of public opinion on transnational issues, and, more generally, for building the micro-foundation for a theory of political conflict.

One reason why we know so little about how social interaction shapes a person’s response to major change is the difficulty of gaining causal leverage in the face of considerable observational complexity. The phenomenon of a rising political divide is a unique opportunity to investigate the political effects of societal transformation as it is taking place, yet the effects of transnationalism are diffuse and hard to identify. It is difficult to tell whether we are witnessing the response to particular issues—chiefly immigration—or a general phenomenon that encompasses a range of issues.

TRANSNATIONAL responds to both challenges by a) targeting citizens and activists in specific localities with varying levels of exposure to transnational effects; b) investigating social interaction on a range of transnational issues; c) embedding local natural experiments within representative national surveys; and d) using panel surveys and semi-structured interviews to assess the temporal interaction of identity formation, affective polarisation, and social networking.