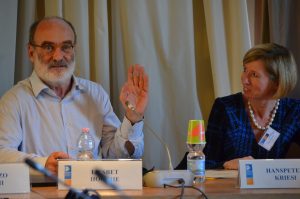 European Parliament (EP) elections in May 2019 came at a critical time in the evolution of the EU. They were first elections in an uncertain Brexit political environment. They also came at a time when divergence on many issues characterise member state  relations, and wider global developments weigh heavily on Europe with the return of hard geopolitics and efforts to undermine the global multilateral order. The election results were expected to produce a highly fragmented Parliament, with the long-dominant centre-left and centre-right blocs unable to form a coalition by themselves, therefore assigning greater influence to smaller players such as the Liberals, Greens and populists. Eurosceptics were expected to win a third of the Parliament’s seats, reflecting the global rise in nationalism. As an international hub of high quality research and reflection on the European Union, the European Governance and Politics Programme has contributed to the build-up to the European elections with a two-pillar project: euandi2019, an online Voting Advice Application allowing citizens to match their policy preferences with the positions of the political parties running for EP elections in all 28 Member States, and spaceu2019, an interactive database informing users on their electoral rights and to allowing them to compare the conditions and requirements for voting in their country of residence and citizenship.

Watch the video recording of the Roundtable with participants: