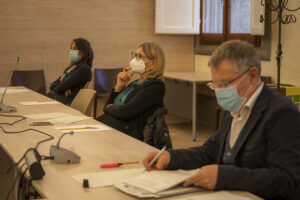 The EGPP hosts a Seminar Series fortnightly on Wednesdays at 12:30-2pm. The EGPP Seminar Series covers the following types of seminars: Research Seminars; Book Presentations; Seminars of the European Union Studies Working Group; Conversations for the Future of Europe.
More information can be found on the seminars and conferences webpage.

Conversations for the Future of Europe 2020 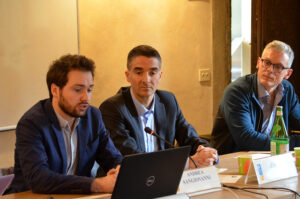 A series of events tackling major EU challenges taking place from February to June 2020. The first 2020 Conversation took place as a residential event in February; the remaining Conversations switched to online webinars, taking place in May and June. The aim of the Conversations is to facilitate debate and inspire far-sighted, creative ideas for how to address current policy problems. Organisers: Brigid Laffan, Philippe van Parijs,  Andrea Sangiovanni,  Juri Viehoff, Lorenzo Cicchi
More information can be found on the series webpage.

A Differentiated Europe Facing Brexit – What Can We Learn From ‘The Norway Model’?

A lecture organised in the framework of the Differentiation: Clustering Excellence (DiCE) project on 24 February 2020.

Eastern Europe 30 Years after the Fall of the Berlin Wall

A conference hosted by the Schuman Centre on 8-9 November 2019 organised by Dorothee Bohle, Béla Greskovits and Gábor Halmai.

Europe in the New World (Dis)order

On 5 September 2019, in his lecture, Alexander Stubb gave his vision about the current challenges for Europe.

The most contested European Parliament elections ever? 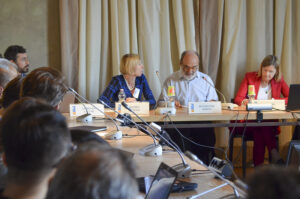 A read-out of the 2019 vote for the European Parliament organised by the EGPP team on 29 May 2019. European Parliament (EP) elections in May 2019 came at a critical time in the evolution of the EU. They were the first elections in an uncertain Brexit political environment. They also came at a time when divergence on many issues characterise member state  relations, and wider global developments weigh heavily on Europe with the return of hard geopolitics and efforts to undermine the global multilateral order. More information can be found on the event webpage.

A two-day open workshop that took place on 14 and 15 March 2019 organised by Maurizio Ferrera and Martin Rhodes.

The Effects of Multilevel Governance

On 23-24 May 2019, the second EGPP Annual Conference focused on the political, social, and cultural consequences of multilevel governance.

Conversations for the Future of Europe 2019 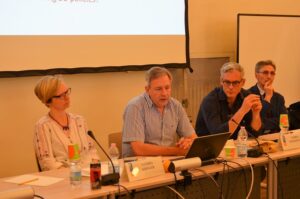 A series of events tackling major EU challenges taking place from January to June 2019. The objective of the series is to guide the steps of the European Union and to mobilise its citizens so as to make policy change possible, it is not sufficient to analyse the past and criticise the present. It is necessary to develop concrete proposals for a better future and to subject them to critical multidisciplinary discussion. The Conversations for the Future of Europe aim to contribute to such discussion. More information can be found on the series webpage.

A conference on European integration held between 31 May and 1 June 2018 and organised Liesbet Hooghe and Gary Marks.

The final conference of the Welfare State Futures Programme held on 24-25 May 2018 hosted 141 participants at the European University Institute.

What Scenarios for Italy and the Eurozone?

A roundtable on the current political crisis in Italy and the Eurozone held on 6 June 2018 chaired by Brigid Laffan.

Roundtable on the Result of Italian Elections

A roundtable on the 2018 Italian parliamentary elections organised by the Schuman Centre on 9 March 2018. 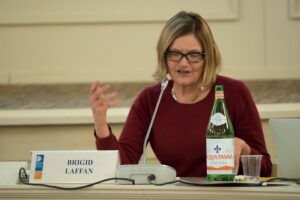 Europe’s wave of key 2017 elections kicked off with the Netherlands’ general election on March. France followed, with its two rounds of the presidential elections in April and in May. In September, Germany voted for its chancellor. Austrian, Romanian and UK citizens also went to the poll during this turbulent year.  Held on 8 March 2018, this conference launched the European Governance and Politics Programme. It alternated a series of country-specific panels with thematic ones, devoted to specific elements that characterised the political and electoral scenario of 2017. More information on the event webpage.

The 2017 Austrian Elections and their Consequences

A roundtable on the 2017 Austrian elections organised by Brigid Laffan and Rainer Bauböck  that took place on 7 October 2017.

A discussion on the 2017 Catalan referendum crisis organised by Rainer Bauböck that took place on 16 October 2017.