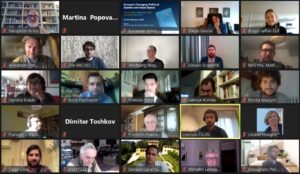 The 2019 European Parliament elections have been described as ‘a fateful election for Europe’. Despite the outcome not matching the feared landslide success of Eurosceptic and populist forces, the general picture is that of a European Union where polarisation and politicisation is higher than the past. The EGPP Annual Conference 2020 presented high-level scholarly research on, broadly, the drivers and consequences of the electoral results of May 2019, as well as the European political space and its (reshaped?) dimensionality. A keynote speech by Simon Hix, who will join the EUI in September 2021 as Stein Rokkan Chair in Comparative Politics, opened the conference. Then, the first two panels were devoted to Europe’s issue space. The second day comprised of three panels dedicated to institutions and citizens, with a focus on electoral systems, spitzenkandidaten, selectorate, party choice and turnout. A final panel on populism and radical right closed the conference. The selected papers presented in the conference will be evaluated by the conference organisers and later published as either chapters to an Edited Volume or articles of a Special Issue in a scientific journal.