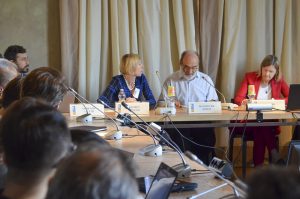 Each year, at the European University Institute in Florence, the European Governance and Politics Programme (EGPP) hosts an annual conference that focuses on a crucial theme for the European Union. This is part of the EGPP’s strategy to promote engagement on contemporary issues through various types of events.

The inaugural annual conference was held on 8-9 March 2018 at and focused on 2017 as Europe’s ‘bumper year’ of elections. An edited volume, containing a selection of the papers presented during this conference and divided into country-specific and thematic chapters, was then published.

The third annual conference, ‘Europe’s changing political system and issue space. What lessons from the 2019 European elections?’, originally planned for October 2020 will take place in February 2021 as a hybrid conference.

A conference held at the European University Institute on 8-9 March 2018 which alternated a series of election country-specific panels with thematic ones, devoted to specific elements that characterized the political and electoral scenario of 2017.

This conference, which took place at the European University Institute on 23-24 May 2019, brought together cutting-edge research on the political, social, and cultural consequences of multilevel governance.